Home
Editorial
The dubious hypothesis of probiotics: How far have probiotics disrupted the conventional vertical of health and nutrition?

Alternating between being tagged as a highly nutritional bacteria and merely a health supplement hyped beyond contemplation, probiotics have increasingly taken the nutrition industry by storm. Touted to be useful gut bacteria, probiotics are deemed to play a pivotal role in enhancing human health by fighting pathogens that contribute to a weak immune system. As the National institutes of Health puts it –

“Probiotics are live microorganisms similar to beneficial microorganisms found in the gut, available to consumers in the form of dietary supplements.”

The acclaim garnered by probiotics is rather discernible, with the product receiving rave reviews by the day for a zillion miracles, the impressive list of which includes boosting the immune system, delaying allergies in kids, preventing urinary tract infections, improving skin health, preventing bone loss, and more. 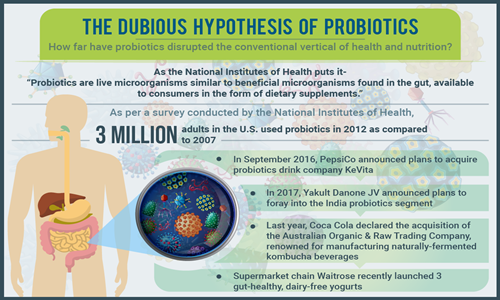 Proponents of probiotics cite innumerable studies proving the benefits of this healthy bacteria, upholding the tactics of nutrition companies that have been leveraging the probiotic fad, a rage among millennials and baby boomers alike. Nutrition aisles at prominent supermarkets, filled to the rafters with probiotic health additives and dietary supplements, provide ample testimony to the advantages of probiotics, claim proponents. A National Health Interview Survey by the National Institutes of Health validates that the popularity of probiotics has increased substantially, claiming that almost 3 million more adults in the U.S. used probiotics in the year 2012 as compared to 2007. The probiotics space also enjoys the support of leading nutrition industry experts that vouch for the goodness of these supplements.

A section of opponents however, propose that the probiotic rage has been hyped to the point of no return, by nutrition enthusiasts and advocates of healthy living, citing numerous other studies advocating their objective. One of them includes a review conducted by a team of nutrition scientists last year, that explored scientific literature about probiotic supplement consumption in healthy adults, from around 45 original studies. While the findings do claim that consuming probiotic supplements has quite a few benefits, the fundamental takeaway here is that the changes may be short-lived. In a nutshell, probiotic consumption would need to be consistent and for the long-term, if the effects would need to be retained, or the gut bacteria may most plausibly return to their pre-supplementation stage within a fortnight.

Controversial perspectives aside, it is prudent to mention that disparate views notwithstanding, probiotics have still managed to majorly disrupt the digestive health supplement industry, as is rather evident from how major F&B companies have knocked themselves out, bringing probiotic-infused products to the mainstream. A few instances validating the aforesaid pointer have been outlined below:

Prominent experts opine that the growth graph of the probiotics industry is on the verge of depicting a highly dramatic incline, given that the space is ablaze with not only robust product innovations, but also a slew of intensive M&As. Noteworthy instances include the $700M acquisition of the Australian probiotic developer Life-Space Group by the Chinese health supplements manufacturer By-Health in 2018 and Neovia’s takeover of probiotics developer Epicore the previous year. It remains to be seen however, if the probiotics space, being a disputable vertical of the nutrition industry, will gain extensive mainstream traction in the next decade.

Shikha Sinha currently manages the editorial team at L2food.com, a digital news platform which provides the latest business highlights and trends of the F&B industry. Shikha also is a contributor on various other online media portals where she writes informative and research-oriented content spanning healthcare, retail, energy, and technology sectors. As her first stint in writing, Shikha was an active contributor on Yahoo Voices where she penned down creative and imaginative pieces. She holds a Bachelor of Technology degree in Electrical and Electronics Engineering. She can be contacted at- [email protected] | https://twitter.com/shikhas999